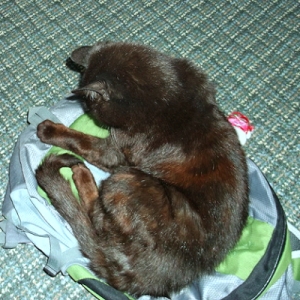 Mike occupying the backpack, possibly hoping to come along to work.

Mike came to us through Friends of Ferals, and he’s always been a personable cat. His original name was Aaron, but I changed it because he just looked like a Mike to me. We adopted him and his sister, Ariel (renamed from Jenny) when they were just kittens. Anyway, they called her his sister, though the rescuer we talked to suspected she was really part of an older litter or his mother. In any case, Ariel was pretty well set in her feral ways and disappeared long ago. Mike howled for her, but she never came back, so he eventually gave up and made friends with Scarlett, our older cat.

As Scarlett got old, Mike seemed like he was aging right along with her. In the last year of her life, Scarlett had all kinds of physical problems and spent most of her time sleeping by the heat vent. If Mike wasn’t outside, he’d mostly be curled up too, either with his buddy or somewhere close by. He’d let her have first digs at meat soup and saucers of milk, which she needed because she got dehydrated and constipated, as if he knew they were meant for her.

Now that Scarlett is dead, though, Mikey has turned all kittenish again. Chasing around rubber bands, messing with my boot laces, pouncing on bungee cords, licking bare ankles. I can’t let him go outside anymore because he’s a flea magnet, and the bites give him a nasty skin condition. There’s just no medicine strong enough to keep fleas off that cat, so no more prowling around the back yard. Now that the weather’s getting warmer, I’ve got to intercept him when he tries to bolt out the door.

But he’s doing pretty well indoors now that he’s on his own — really becoming a people-cat.

This entry was posted in Uncategorized. Bookmark the permalink.